The great German beer festival isn’t known for being particularly healthy. With iconic foods including sausages with sauerkraut and mustard, breaded meat schnitzel, fried potato balls stuffed with pork or beef, and giant, doughy pretzels made with refined white flour, the only green in sight is likely to be a parsley garnish.

But there’s no need to toss the bratwurst out with the bathwater. There are plenty of ways to add nutrition to your Oktoberfest menu. And these six heart-healthy versions of German recipes prove that flavour doesn’t just come from meat and oil.

Where did Oktoberfest come from? The history of the festival goes back to 1810, when Bavarian Prince Ludwig married Princess Therese. The party was such a hit that they made the event an annual tradition. Over the years, it kept getting longer (no one wanted the party to stop!) and its start date moved to the second-last weekend of September, with celebrations running until the first Sunday of October.

Anchored in tradition but updated for health, these alive-inspired recipes for some of the greatest Oktoberfest foods A unique Oktoberfest menu—alive-style! will have you wanting to extend the holiday, too! 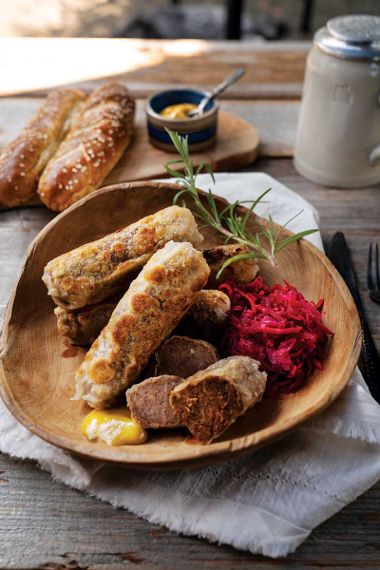 The trick to these plant-based sausages is rolling them in rice paper wrappers before steaming and grilling them. The rice paper creates a translucent coating similar to sausage casing, but without pork. These are best served with grainy German mustard (preferably stone-ground) and sauerkraut (look for unpasteurized versions or make your own), but they’re also great sliced into pieces and cooked into a tomato-based barbecue sauce with curry powder—a traditional currywurst! 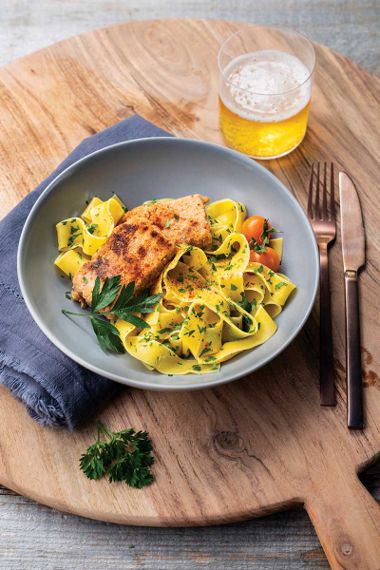 Schnitzel usually means tenderized meat coated in egg and breadcrumbs and deep-fried. The German version is often pork, while the Austrian wiener schnitzel has to be veal (it’s a rule). But this version of schnitzel would have even Julie Andrews singing its praises, thanks to the tender tofu that skips the fryer. Schnitzel can be served simply with noodles coated in (plant-based) butter with lemon wedges, but lingonberry sauce (reminiscent of cranberry sauce), tomato sauce, or mushroom gravy are also Oktoberfest regulars. 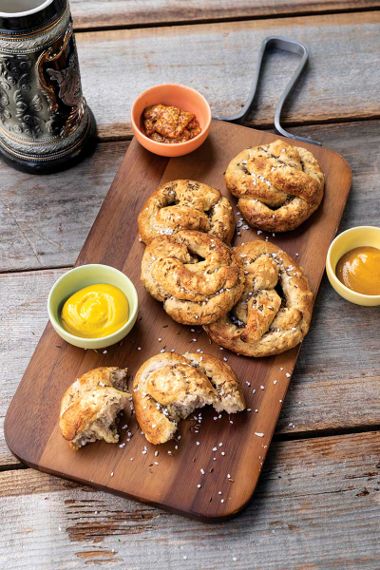 At Oktoberfest celebrations in Munich, there are always people walking around selling large pretzels, says Canadian expat Chris Gilles, who moved to the city in 2018. The large pieces of golden, twisted pretzel dough come topped with coarse salt for a savoury crunch with every bite. “They don’t come with any dipping sauce,” Gilles says, “but you could dip it in sauce if you had ordered something else”—say, the honey mustard or stone-ground mustard you might have with your bratwurst or sauerkraut balls. But don’t feel bad if you prefer to break from German tradition and dip them in caramel or tahini instead! 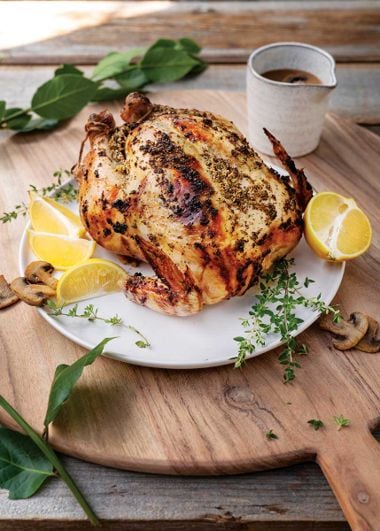 This dark beer-marinated chicken uses the convection setting on your oven to create a crispy skinned bird. Convection cooking circulates air around the meat, crisping it like rotisserie without needing a spit or a lot of oil, similar to an air fryer (which you can also use!). If you don’t have a convection setting on your oven, you can simply bake the chicken for longer at the same temperatures as below, until a meat thermometer inserted in the thickest part of the thigh reads 165 F (74 C). 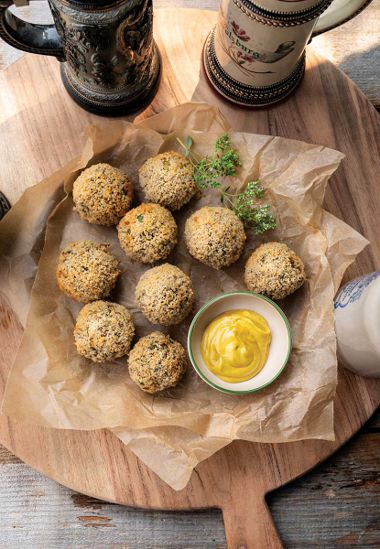 Traditionally made with bratwurst and fried, these plant-based balls are baked and made with tempeh and mushrooms for a savoury, satisfying chewy interior and a crispy exterior. You can also use your homemade plant-based bratwurst as a stuffing in place of the croutons, but it seems a shame to go to all that work shaping them just to pull them apart. 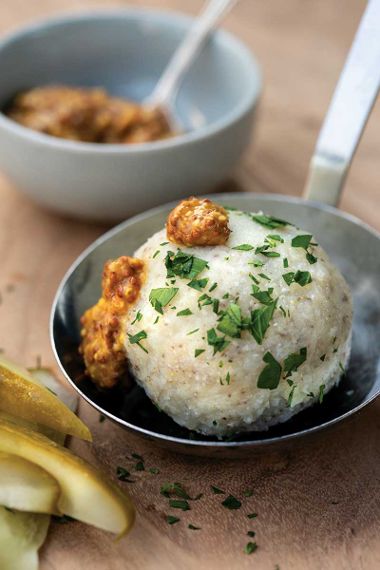 "Germans do potatoes in general very well,” says Canadian expat Chris Gilles, who now lives in Munich and has celebrated many an Oktoberfest there. “Knödel seem kind of rubbery. You don’t really think it’s potato when you first see it, but it’s tasty.” But he might be surprised to find that this alive-inspired version of Bavarian potato dumplings is made with a combination of potato and cauliflower, because as anyone who’s eaten cauliflower gnocchi knows, the low-carb vegetable is a great way to lighten up starch-heavy foods (and Biergarten menus).

Mustard is usually made from either whole or ground yellow, brown, or black mustard seeds, plus vinegar or water, salt, and other seasonings. The main differences come from the types of seeds used and how finely they’re ground.

Most commercial mustards are made with yellow or brown mustard seeds, though blends of two or three kinds are common, as it allows for a balance of flavour and heat. Vinegar reduces the heat slightly, but keeps mustard strongly flavoured. Water maintains the heat, but flavours fade faster, especially with hot water. These are some of the kinds of mustards you’re most likely to find:

Most people will recognize this mustard as the classic bright yellow squeeze bottle that lives in many a fridge and is a barbecue staple. As the name implies, it’s made from mostly yellow mustard seeds, but since yellow mustard seeds are generally less hot than other mustard seeds, other colours are often added for a touch more nose-tickling spice.

Rather than just one type of mustard, this is a group of mustards in which the seeds are left whole or cracked but not blended to a smooth consistency. The taste is often more pungent. Grainy mustards include creole, whole grain, and stone ground (though most mustards aren’t actually ground with stones anymore). These mustards are great for potato salads, sandwiches, or any dish where you want your mustard to have some texture.

Made with brown and black mustard seeds and white wine, Dijon mustard has a mild enough flavour to spread liberally on main dishes or add to just about anything without overpowering the main event, from salad dressing to grilled tempeh. It has a saltier, less acidic flavour than most yellow mustards.

Easy to make at home, honey mustard is a one-to-one blend of honey (or another sweetener) and any kind of mustard (though it’s often yellow mustard). It’s great for marinades, dressings, and—our favourite—pretzels.

Made from brown mustard seeds (or blended with black for extra spice), this type of mustard is often spread on sandwiches. It has more texture than Dijon, but less than grainy mustards, and it’s usually seasoned with warm spices such as nutmeg, cinnamon, or ginger.

Hot peppers aren’t added to hot mustard as the name implies (though some infused mustards do use chilies). Instead, the spiciness of the seeds themselves—think spicy wasabi or horseradish—aren’t dialled down by vinegar or hot water. These include Chinese mustards, which are known for their natural mustard seed heat and are good when used as dipping sauces for rich meat dishes.

This is a blanket term for any mustard originating in Germany or made in a style that’s supposedly German (which unofficially means “good for eating with sausage”). Some Bavarian mustards are sweeter, some are spicier, and others fall somewhere in the middle.

More and more mustards these days are being infused with spices, herbs, beers, and other flavours. A beer-infused mustard would be a great pairing for any of these recipes, while a sweeter flavour might be best for the gluten-free pretzels.

Amie Watson is a Montreal-based freelance writer, television contributor, and founder of the Fork That app. Her work has appeared in the Montreal Gazette, enRoute magazine, and The Globe and Mail.

Don’t be fooled by the simplicity of this roasted vegetable appetizer platter. High quality ingredients, a variety of textures and colours, fresh herbs, and a flash of lemon make it shine.  Not all olive oils and balsamics are created equal Use your good, fruity, cold-pressed extra-virgin olive oil to accompany this appetizer platter, since the quality and flavour will shine through. You can use a more neutral and affordable olive oil for roasting the vegetables, if you prefer.  As for the balsamic vinegar, use either an aged one that’s thick and sweet, or reduce a young balsamic in a small saucepan until thick, optionally adding a pinch of sugar to sweeten it (see the oyster mushrooms with caramelized parsnips recipe for helpful directions). A store-bought balsamic glaze that’s already been thickened works as well, but check the ingredients for unwanted preservatives and sweeteners.

Herbs and mushrooms and roots, yum yum! Not only are these all categories of helpful nutrients that can support your immune health through the annual cold and flu season, but they also fit snugly into the category of adaptogen.  And what is an adaptogen? Often thought of in terms of herbs only, adaptogens are known for their help in supporting our adrenals, glands that produce hormones to help regulate our metabolism, immune system, and blood pressure as well as our response to stress. If the coming season has you stressed about running out of energy, adaptogens may be the ingredients you need to help rebuild and strengthen your empty tank while also cooling your jets and keeping you calm.  Gather while you can Some of these adaptogenic stars can be found in abundance right now. Autumn is mushroom season, and root vegetables are also in season—and plentiful. We’ve coupled the harvested beauties of roots and fungi with healthy adaptogenic herbs that are available all year round.  Incorporating these ingredients into your menu will benefit you in a myriad of delicious ways. From building energy and supporting your immune system to tantalizing your taste buds, each recipe provides a medley of irresistible flavours. Herbs for better health Healthy herbs are an all-year bonus that offer many health benefits, from lowering cholesterol to controlling blood sugar, along with potential protection against cancer. Adding a medley of herbs to your recipes not only adds amazing flavour bonuses, but is also a sure-fire recipe for good health. Here are some of our favourite healthy—and delicious!—herbs:  basil  cilantro dill garlic mint onion  oregano parsley rosemary  turmeric ’Mazing mushrooms Mushrooms, sometimes mysterious and often misunderstood, may offer amazing health benefits to those of us who relish their flavour possibilities—the quiet flavour that makes other ingredients in a recipe pop.  From lowering blood pressure to supporting our immune system and being an incredible source of potassium, who knew such an earthy food could be the anchor for so much goodness? And the height of irony: often grown in the dark, mushrooms are actually touted to be the only “vegetable” (they’re actually their own food group—fungi/mycology) that naturally contains vitamin D.  Here, we’ve listed only a few of the most common mushrooms used in cooking. But did you realize that there are more than 50,000 varieties of mushrooms?! They’re not all edible, but that’s a lot of fungi serving important roles in the ecoculture of our planet and our diets!  boletus  chanterelle  cremini enoki maitake morel  oyster porcini portobello reishi  shiitake white button Root for roots! When it comes to root veggies, the healthy benefits are worth rooting for! These underground beauties offer an amazing wealth of nutrients, including essential fibre and calcium. Root veggies play a huge role in nutritional sustainability. We’ve featured only a few in our recipes here, but the root vegetable category is almost as limitless as the mushroom category. The following are but a few:  beets carrots  celery root (celeriac) daikon fennel  horseradish Jerusalem artichokes  kohlrabi parsnips radishes rutabagas sweet potatoes turnips yams

This dish is a taste sensation: a fresh herbed salsa verde drizzled over smoky chipotle-baked salmon. Fresh herbs meet smoke-flavoured salmon, resulting in a riot of heady flavours—and a smorgasbord of heart-healthy benefits.

Roasted Roots and Lentils with Tahini Dressing and Zesty Herbs

Spooned over hearty fall greens such as kale or chard, this delicious side dish can also double as a main meal; its flavours absolutely pop with our zesty herb topping. The beets are packed with amazing nutrients, plus they’re delicious served hot, at room temperature, or cold.  Add some crunch This dish is a meal in itself. Scatter toasted pine nuts or pecans overtop for some added crunch.